The Scotsman meets sausages at the Pup Up Cafe in Edinburgh! 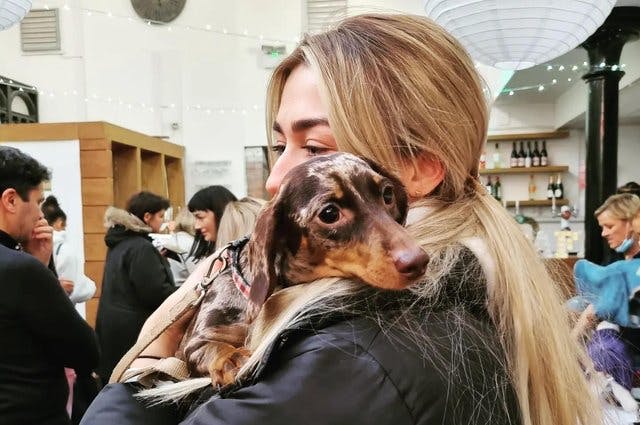 This event is heaven for wiener dog lovers.

There’s a six-foot-something bloke behind me and he’s squealing. “They’re so damn cute!”.

Even the toughest of us are turned to jelly by the queue that’s forming outside The Old Dr Bells Baths in Leith.

We’re here for the Pup Up Cafe, which has been touring up and down the UK, with the next Scottish date at Revolution Glasgow on April 24 2022.

This three-year-old business has been created by event organiser, Marcus Ackford, 27, who’s based in Exeter and owns a sausage dog called Neegan and a cat named Teddy.

While previous versions have featured other breeds, this is a special dachshund-only edition. Ackford knew there would be an enthusiastic response, as there are plenty of wiener dog fans in Scotland. Along with cockapoos, I’ve certainly seen more of them in my local park during lockdown, when dog ownership increased exponentially.

You can hear the pitter patter of tiny feet as sausages wiggle and trot along Great Junction Street.

Staffies and a Border collie stroll past, incredulous.

Pup Up Cafe organisers have been inviting guests to visit throughout the day, with each session lasting 90 minutes.

We’ve got two of the limited Regular Human tickets, since we’re sadly dogless. Along with all the owners, we’re ushered in at the stroke of 2pm, and go downstairs to the room that they’ve reserved for the occasion. The doors upstairs are sealed and guarded, so there can be no escapees.

The leads and harnesses start to come off.

Just like children at soft play, some of the dogs are shy to start with, especially the pandemic puppies, who have had less socialisation over the last year or two.

One of them is glued to his owner’s lap, giving the room of about 40 dachshunds the suspicious side eye.

“He’s not so good with other dogs,” his human says, though he quickly warms up.

Luna is trembling in her pink bow-tie and knitted sweater with hearts on it. The next time we see her, she’s glued to her owner’s ankle. The third, fourth and fifth times, she dashes past, tail ticking like a metronome.

Some of the party-goers are miniature, others are standard. They come in sizes ranging from chipolata to chunky Cumberland. Apparently, there are two unofficial in-between proportions – tweenies (something between miniature and standard) and the minuscule kaninchen (rabbit sized). There are doxies that are long-haired, wiry and short haired, merle, black and tan, conker, sable and caramel coloured and many are dressed up for their special day out.

The bow-tie seems to be a popular dachshund fashion item and there’s a stall selling them. However, many, including a tan dog named Steve, are also wearing thick knitted geography teacher tank tops. While dressed in their leisure wear, you would never guess that the translation of dachshund is badger dog, and they were originally bred to track and hunt these creatures, as well as other small quarries. Not in these outfits.

There’s one sausage who looks very like Alan Partridge in his dog-sized aviator jacket with the fleecy collar turned up. I tell the owner, but I think they’re too young to get the reference. In fact, most of the humans here look to be in their twenties and early thirties. Proof perhaps that owning a dog is the new having a baby.

As the hall gets busier, I’m scared to move my feet, in case I tread on tiny toes or trip over a little torso.

We only see two non-sausage interlopers – a French bulldog, and a bichon frise, who is a crash test doggy in that it’s demonstrating the canine car seats being sold by its owner at this event. They are sweetly oblivious to being the odd ones out, as they should be.

However, there might be a future edition to showcase these breeds. As Ackford says, “We’re hoping to be in Scotland with our pug/Frenchie and doodle tour next year”.

The sausages are getting more excitable, as the free puppuccinos, which are served in mini paper cups, kick in, and someone discovers the box of toys. I suppose this is like at a kids party, when the Haribo and cake have been imbibed and the bouncy castle is inflated.

A wire-haired teckel in a knitted vest is barreling round in circles. Another dog vomits up his puppuccino, and there’s an accident out the other end too. Hey ho, those are the dog owners’ breaks. A poo bag is unfurled and it’s all dealt with quickly. Nobody raises an eyebrow.

There is some other naughtiness. One gorgeous looking long-haired dachshund with hair like Farrah Fawcett is humping every other dog in sight. There’s always one who wants to be the Alpha. Most of the other dogs are either confused or surprisingly good natured about these embarrassing incidents.

The best behaved include the pale grey Monty, in a controversial shade called Isabella, which can come with associated health problems. His owner explains that he was one of 13 who was rescued from a Hungarian kill shelter. Anyway, he is a soulful boy, and is here with his jolly Jackshund sister, Daisy.

When everyone gets too excited, there’s a chill-out zone upstairs, where they’re serving human cappuccinos and cake, so you can escape the dog melee. We head up here, when the 90 minutes is almost up, as my face hurts from grinning inanely and my back aches from crouching to pat and scratch all my new buddies.

This Regular Human will be looking out for all of them in my local park. 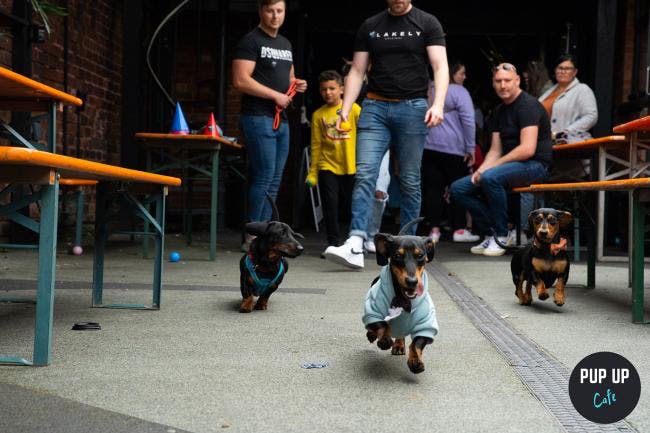 The Dachshund Pup Up Cafe is returning to the Revolution Bar in Southend! 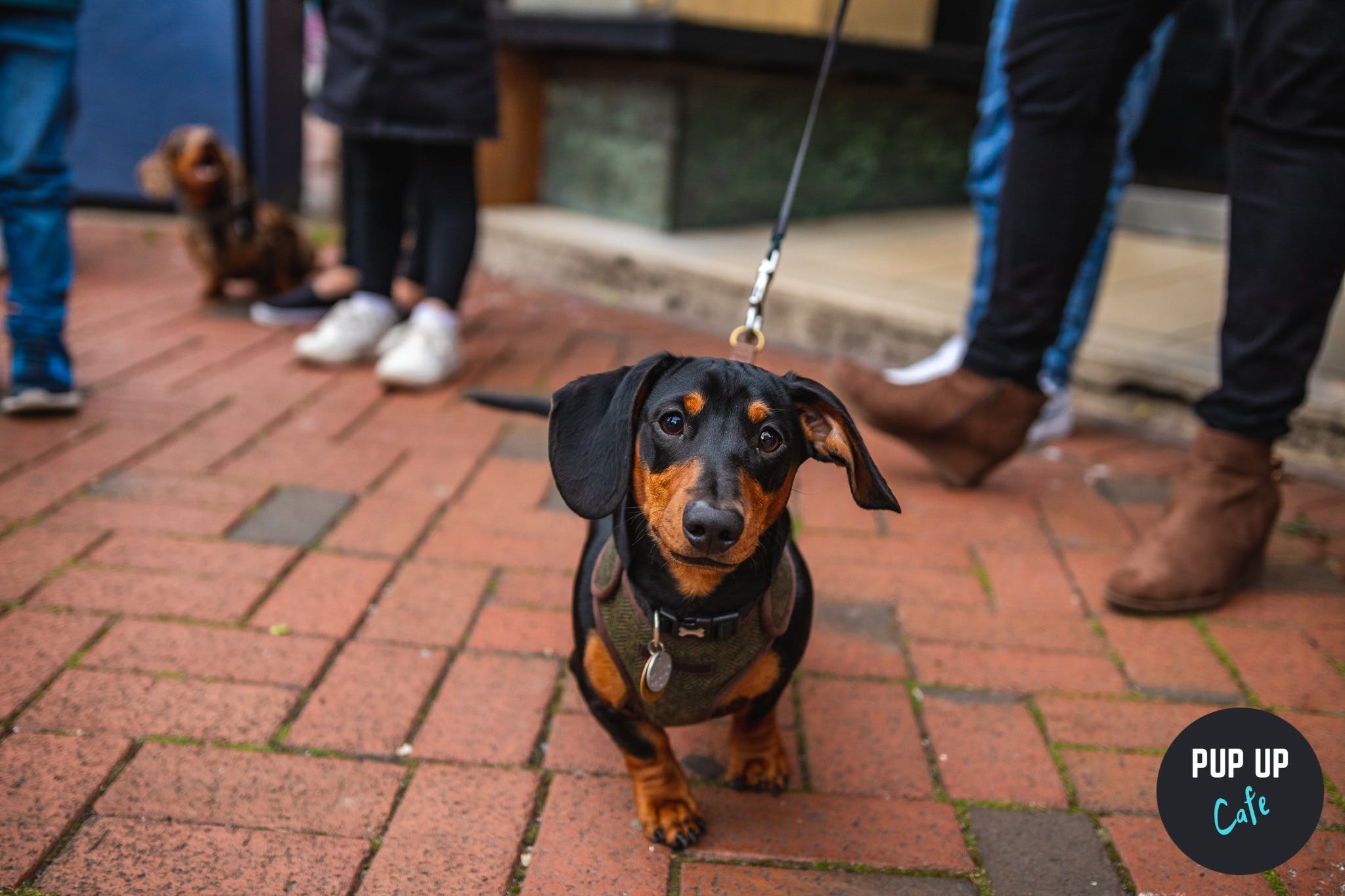 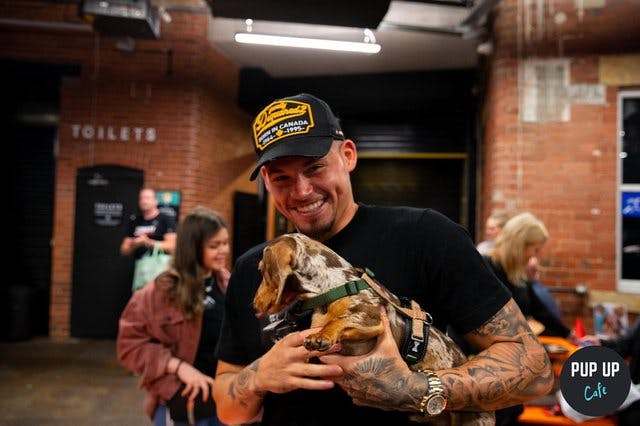